Speaker/Mic Activity Indicators: The toolbar now has activity indicators for speaker and microphone. During the recording whenever there’s any activity on speaker or mic, they blink. If both the sets are blinking then everything’s okay during the recording. Here’s a screenshot of it in action.

Notes: CG now has ability to add notes during the recording process. This feature is accessible from the live stats window. Each note is appended with a timestamp. The notes can be viewed/edited/deleted from the recordings page. 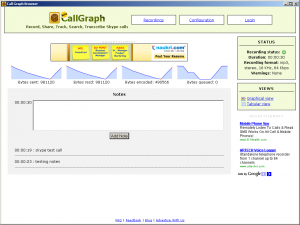 Wave Audio I/O Type: We have reintroduced back wave I/O type to CG, mainly for Windows 2000 users. Its available from the advanced tab of the configuration window. The default is DirectSound.

Breaks in recording: The encoding algorithm had a bug which caused breaks to appear in one of the tracks in the recorded file. This has been fixed now. Thanks to Jon and Chris for testing it for us.

Retry for upload failures: If upload to CG CRIMS fails due to some reason, then it is automatically retried twice. The upload status message now also displays the number of files which are queued for upload.

As usual, please send us your feedback on this update. And update now. Thanks!

How We Make Money?

How We Make Money?